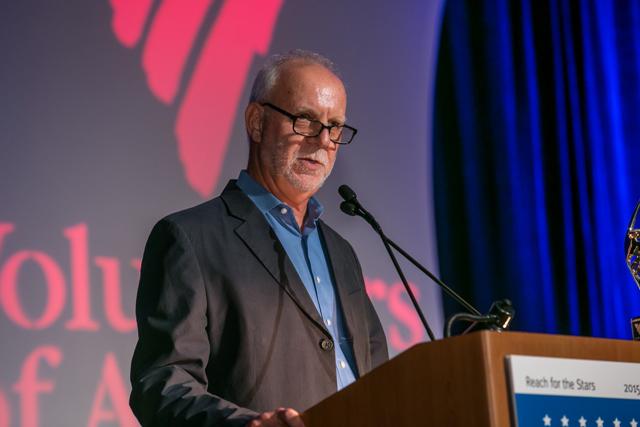 LOS ANGELES (June 30, 2015) – Volunteers of America, one of the nation’s largest and oldest human service organizations, presented Los Angeles Times columnist Steve Lopez with the organization’s 2015 Empathy Award in recognition for his efforts to build awareness for the plight of Southern California’s most vulnerable residents. The Empathy Award honors news organizations and journalists for outstanding community service and excellence in reporting about social issues.

Steve Lopez has been an LA Times columnist since 2001. He has written extensively about Volunteers of America’s work with vulnerable veterans, telling the personal stories of the men and women we serve in the Los Angeles area. His book “The Soloist” – later adapted as a movie staring Jamie Foxx and Robert Downey Jr. – focused on Lopez’s relationship with Nathaniel Ayres, a musician who developed schizophrenia and later became homeless before finding shelter at Ballington Plaza, a housing property operated by Volunteers of America Los Angeles. The book was a Los Angeles Times and New York Times best-seller and winner of the PEN USA Literary Award for Non-Fiction.

Lopez has won more than a dozen national journalism awards for his reporting and column writing at seven newspapers and four news magazines, and was a 2011 Pulitzer finalist for his columns on elder care. In addition to “The Soloist”, he is the author of three novels and two collections of columns.

Volunteers of America’s Empathy Award was first given to the Chicago Tribune in 1995 for a crusading series on violence against children. Other recipients have included “Dead Man Walking” author Sister Helen Prejean, national columnist E.J. Dionne, Washington Post editor Colbert I. King and CNN.

Approximately 600 Volunteers of America leaders and care providers from across the United States travelled to Los Angeles for the organization’s 2015 National Conference on June 27-30. Volunteers of America Greater Los Angeles serves more than 30,000 people a year through affordable housing and supportive services aimed at clients that include homeless veterans, seniors, low-income children and families, people recovering from addiction, and those re-entering communities from the correctional system.

About Volunteers of America
Volunteers of America is a national, nonprofit, faith-based organization dedicated to helping those in need live healthy, safe and productive lives. Since 1896, our ministry of service has supported and empowered America’s most vulnerable groups, including veterans, seniors, people with disabilities, at-risk youth, men and women returning from prison, homeless individuals and families, those recovering from addictions and many others. Through hundreds of human service programs, including housing and health care, Volunteers of America helps more than 2 million people in over 400 communities. Our work touches the mind, body, heart and ultimately the spirit of those we serve, integrating our deep compassion with highly effective programs and services.